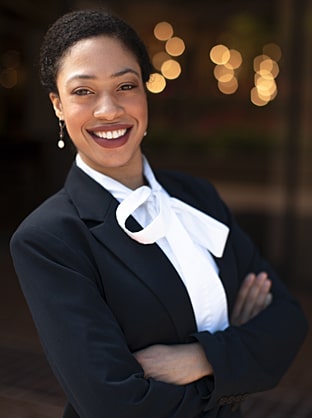 A native of Manassas, Virginia, Samara Corbin grew up around immigrant families, leading to a passion for advocating for immigrants. As an attorney, Ms. Corbin has represented immigrant clients in matters including asylum, VAWA, T-visas, U-visas, unlawful presence waivers, naturalization, and more. In addition to providing legal representation to immigrants, Ms. Corbin has also advocated for the legal rights of immigrants through her literary and academic compositions. In 2009, Ms. Corbin published her first book in which she detailed the experience of a young British woman in 19th-century England as a comparison of foreign society to that of the United States.

Subsequently, she wrote novels about the mental, physical, spiritual, and legal struggles of an immigrant victim of human trafficking. Ms. Corbin has defended victims of human trafficking in criminal cases. Further, Ms. Corbin has represented immigrants in other legal matters such as estate planning, child custody, divorce, and as a Guardian ad Litem, representing the best interests of immigrant children in state court.

Ms. Corbin is fluent in English and Spanish and is conversational in French.

Get a FREE Consultation